Running accelerated tests at elevated humidity levels in a climate chamber requires a (constant) supply of deionized water to feed the humidifier. Sealing the chamber goes a long way to minimize the loss of water during the test, however the setup will never be vapor-tight. The water supply needs to be adequate to replenish the water lost to the outside of the chamber. Most climate chambers come with an integrated water tank and that might be all that is necessary for short test runs. However, once the tests start to last for weeks or even months, an external tank is a worthwhile addition to the test setup. To quote the ESPEC North-America homepage:

Be sure the water tank can be filled easily because you will be doing this on a regular basis (once a week to once a month).

Obviously, the tank needs refilling less frequently if it is bigger (duh 😑). In the following I will list the requirements for using an external water tank, the equipment necessary for connecting it to the chamber and some general advice for installing the system.

Water tanks alone won't do you much good, as the external water supply inlet of the climate chambers need a defined water pressure to work properly. At least mine do. The picture above shows the setup I came up with. Two tanks of 60 l each sit on a wooden shelf. Both feed into a pump used to pressurize the water, which is then distributed to the climate chambers. To prevent potential damage the pump has its own control circuit in an electric cabinet. 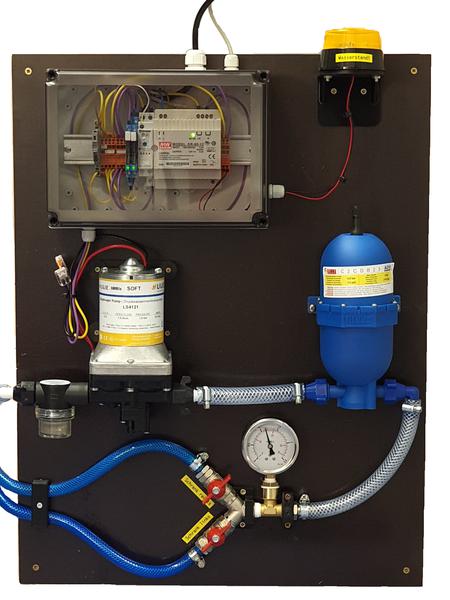 Board with pump and control circuit.

The picture above shows the pump and distribution pipework together with the control circuit. The pump is a model made for caravaning and features an integrated pressure switch. The pump only turns on when the pressure is below a certain threshold. It runs until the configured pressure is reached and then turns off. It is accompanied by a water filter to the left and a pressure storage tank to the right. The pump has to run less frequently if a storage tank is added, thus reducing the wear.

Below the pump is a y-piece distributing the water to both climate chambers. Each connection gets its own shut-off valve, which is useful when servicing the system. And a pressure gauge, which is an absolute must! You will want to check the water pressure sooner or later, so don't skimp on the pressure gauge [1].

The good thing about the pump is it is self-regulating. So as long as it is properly set up you don't have to worry about the water pressure. However, it has one weakness as it does not like to run dry. If it can't pump any water it can't increase the pressure and will run until it's dead. This is what the control circuit in the small electric cabinet is for. A float switch in one of the tanks monitors the water level. If it sinks below the threshold the pump is turned off by a relay and the warning light is activated. A timer-relay is connected between the float switch and the rest of the circuit to debounce the signal. This prevents the relays from switching repeatedly when the switch gets bumped, e.g. when water is refilled. 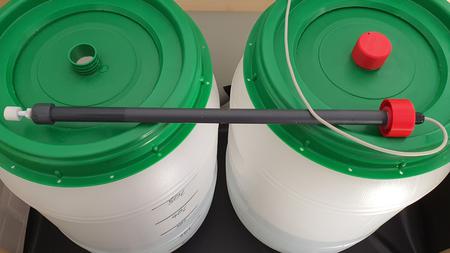 Float switch mounted at the end of a piece of PVC pipe.

The float switch is mounted at the end of a piece of PVC pipe so that it reaches down to the critical water level. Its cable runs inside of the watertight pipe. It gets screwed into the top of the tank with a 3D-printed cap.

This system has been running reliably for months without a hitch. Having large storage tanks definitely reduces the workload when running long-term tests. Mounting the pump and accompanying components on a piece of plywood makes it easy to modify or extend the system later on.

The fittings used are plastic or brass. So far they don't show any wear. Stainless steel fittings would have been even better, given that the deionized water running through the system is quite aggressive. Unfortunately, they are also quite expensive 😔.